Intro. Caleb, one of the 2 spies that Moses sent with a positive report. The remaining 10 did not make it to promise land. The point is that ten of the spies saw only the danger, two (Caleb and Joshua) saw the opportunity. The majority measured the giants against themselves, Caleb and Joshua measured the giants against God. Caleb had faith in the power of God. To Caleb, God was greater than the biggest giant. Caleb was not naïve about what they faced, giants and fortified cities, he did not minimize the problems, but rather he magnified God.

1. He followed the Lord fully. vs 8 (God honors obedience).

2. He has a brave heart. vs. 7 3. He is consistent. vs. 10-11 (God honors faithfulness). The first obstacle of claiming his mountain was the obstacle of Friends. You remember way back in Caleb’s experience he had to stand alone, not only outvoted by his peers, but ridiculed by the masses. Second, is the Obstacle of Racial Prejudice. It may surprise you to find out that Caleb was not a Jew, he was according verse one he was a Kenizzite (ke’-niz-ites). That means he was a Gentile. Perhaps there were those who looked down on him because of his race, and I suspect there were. But Caleb did not let this deter him from following the Lord fully. Born a Gentile and an outcast he became a child of the promises of God. According to Hebrew customs if you joined Israel you were adopted into one of it’s tribes and your name was added to the genealogy. We too were born outside the family of God, when we accepted Christ we too are adopted into the family of God. Paul says in Romans 8:15-16, “For you did not receive the spirit of bondage again to fear, but you received the Spirit of adoption by whom we cry out, “Abba, Father..."

3. The Obstacle of Age. At age eighty-five Caleb is not ready to quit. Even at the age of eighty-five he had not lost his enthusiasm for the Lord or his faith in God’s power. And his boast was not idle (15:13-14). James 1:8 Age is no barrier in doing God’s will. God keeps His people alive as long as they need to be in order to fulfill all that He has planned for them. Ex. Ate Nelly. The Final obstacle is the obstacle of the enemy. We need to see that just because God had made a promise to Caleb does not mean that he could just sit make and watch it happen. Caleb asked for the hill country surrounding Hebron – land that had not yet been conquered and still inhabited by some of the strongest people of Canaan (v.12). In fact Caleb requested the very location that had put the most fear into the hearts of the other ten spies.

4. He claimed the promise of God. vs. 12 ( God honors those who do not quit). Mark 11:24 Conclusion: The word “wholly” means “wholeheartedly” or “with you whole heart.” In fact if you look back through chapter fourteen you will see that the key word about Caleb’s service before God was the word “wholeheartedly.” The land had rest from war. vs 15
Posted by Lord Jesus' Stewards Fellowship - February 28, 2016

A Call to Christian Parenting 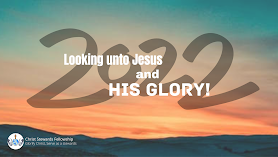 Looking unto JESUS and His GLORY